Moving Sidewalks in the 1920's

In the midst of a pretty normal report on how to save Georgia Power's Atlanta transit system, the Beeler Organization threw in a proposal right out of Astounding Magazine.

To thin the hords of pedestrians on the surface, they proposed an underground people mover. One North/South for the Peachtree corridor and one East/West for the Marietta St- Edgewood corridor. They imagined a cavern with it's own shops and pedestrians. 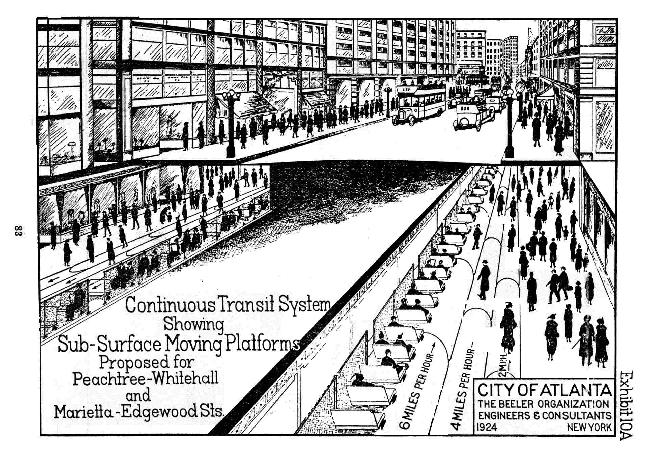 And there, similar to a Robert Heinlein story are bands of moving sidewalks that get progressively faster towards the middle; the middle being a six mile-per-hour track with bench seats. 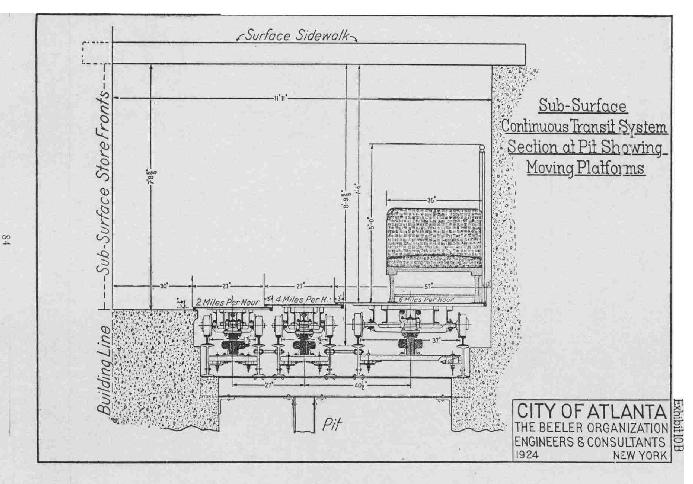 It appears Beeler wasn't kidding about this, as it shows up in the introduction on page vi under the main title Summary of Principal Recommendations

Moving platforms or sidewalks underneath the present sidewalks, (1) on both sides of Whitehall and Peachtree Streets between Mitchell Street and Carnegie Way; (2) on Marietta Street and Edgewood Avenue between Spring and Ivy Street . These sidewalks virtually will be subways without trains. From a stationary sidewalk underneath existing sidewalks, pedestrians will step to a platform moving continuaously at a speed of two miles an hour, thence to a platform moving at a speed of four miles an hour, and if a greater speed is desired, to a sidewalk equipped with seats and moving at six miles an hour. This plan also permits of new store and office building entrances below the present sidewalk.

Now, this is being proposed to a company making half what they made four years before! I can't imagine how expensive this plan would have been to implement.

Within the report, they go into alot of detail and it's too bad a subway wasn't conceived at this time. The BMT was being built around then in New York and that kind of infrastructure under the ground would have lasted long past the 1940s when most of Atlanta's surface tracks were finally abandoned. This would have been a much different city.

Anyways, this definitely was a case of "out of the box" thinking!